We released the following updates since 8.43:

Now, you can quickly and easily learn about any newly released ShotGrid features in-app!

With this release, you will see a one-time pop-up window introducing the icon and the feature. 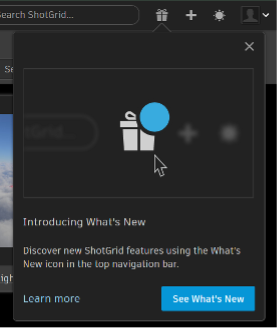 When a new feature is released, the icon will display a notification badge

. After visiting What’s New, the notification badge will disappear, returning the icon to the default state until the next feature is released

Optimized the performance of email notifications in large batches, with a focus on notifications with very long reply threads or with a very large number of addressees. [SG-28746]