Hello everyone!
I’ve been having some bugs in the last few weeks. They consist of the following:
On my pc I export a shot to upload as a version directly from hiero to shotgun using the toolkit. Hiero freezes and the only thing I can do is close it. And in shotgun only the shot entity is created but not the version and it is not uploaded. But the strange thing is that this is random, sometimes it works and sometimes it doesn’t.
On the other hand my colleague, who has exactly the same setup as me, does the same process and it works perfectly for him.
Does anyone know what could be happening on my PC, taking into account that it is not a performance problem, why this failure?

I’ve tried to reinstall the shotgun desktop app but nothing

( This is the report somethimes do in the console) 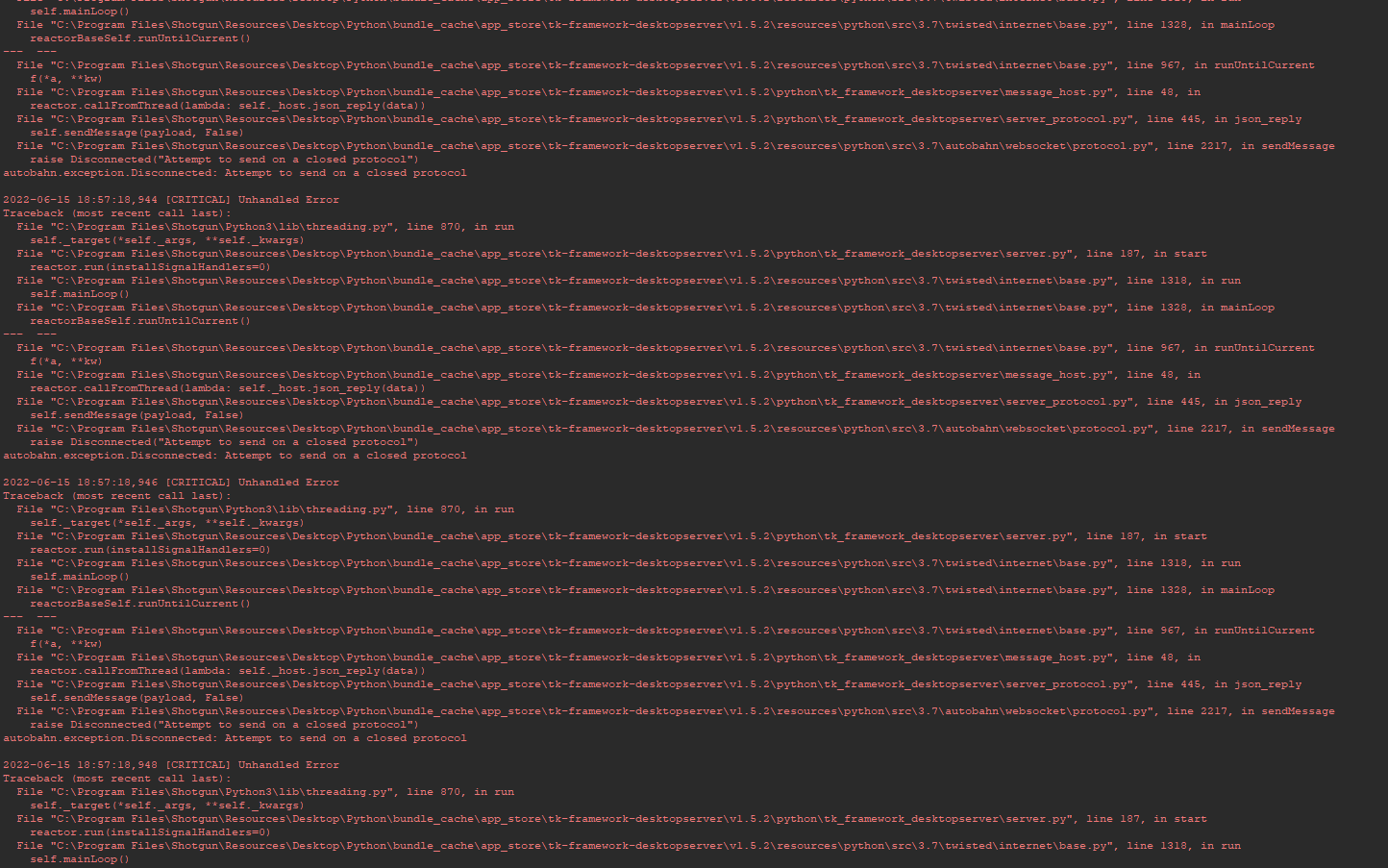 I heavily modified the tk-hiero-export app code and have also run into this problem before.
Not entirely sure what it was but I seem to remember some of the functionality is expecting a function to return True and if it doesnt it hangs (as hiero is executing the app code).

It would be good to have a look at your logs in debug mode to see where it hangs.

(You may need to sanitize them before posting)

Also, can you check you don’t have debug logging enabled?

Hi Ricardo thanks for the answer!

I’ll give you more background of the activity we have had to arrive on this error. So we are trying to build up toolkit on my company for first time and we are first going for the hiero conection with Shotgun.

We where trying hard to see if the uplad of the shots and version was good but this error came out. So we force it and force it to see if we could figure out what was the cause. After a lot of testing we came on the following answer:
If you create a shot and upload something with hiero. Then you go to shotgun and delete that shot to then try again to upload it, it will give you some times this error (if I wait) or hiero just brokes and nothing appears.

So knowing that we where happy enought

Beacouse in a real case it woudn’t be common that a shot is deleted from shotgun.

Now the thing was what I put on my first answer. All of this testing was done on my pc, and it feels like if my shotgun was tired of all that errors and testing beacouse from that days all the times I’ve tried to export something with the hiero-export, hiero brokes and that error appears on the log. Trying all the time thing taking care than the shots are never deleted or have never been deleted.

But doing the same thing on the other pc it works fine.

With all of that sed, again thank you so much for taking the time to answer me! Tomorrow at first time I’ll upload what you have said, one more cuestion to be able to give you all I can, what is “sanitize the log”?

Hi Patrick thanks for the replay!
I think I have it enabled, tomorrow I double check. That affects the process? I thought that debug logging just give more info in the console

Shotgrids keeps a local cache file of the filesystem locations to speed up path generation.

It you create a shot, create folders for that shot and then delete that shot and remake the same shotname your folder cache will still have that shot path listed under the Id number of the deleted shot record, and it cannot proceed unless you unregister the cache.

This is indeed something where Hiero can freeze as the code doesn’t seem to catch this properly or maybe because it doesn’t run in the main thread.

So even if I deleted the folders that the export had created the cache still have it, yea make sense

Then the problem I still have, wich is that hiero basically collaps every time I tried to export something with the tk-hiero-export would be fix just deleting that cahe files?

I’m gonna try it and give you some feedback, thankss for the help!!!

No you’ll need to unregister the folders for that entity.

If you have a centralised config you would need to find the tank command file (in the root of your pipeline config), open up a command prompt/terminal and run tank Shot {shotname} unregister_folders

A better decription can be found in this post:

For a distributed config, refer to this:

How can I unregister folders when using a distributed config? Pipeline Integrations

Sorry to reply late, I wanted to make sure I fully understood what you were telling me and that I had tested everything well.

I checked in the entity filesystem and I had a lot of repeated shots, or that directly the path to which they marked did not exist because I deleted it.
Finally run a tank unregister --all which cleaned everything up and now my hiero exports perfectly.
Thanks so much for the help!

Great to hear this worked for you!