Finding the best way to submit versions for review

Hi, probably some noob issues I’m having here getting a submit/review process to flow smoothly. I’m trying to get a bunch of new artists and reviewers at an animation school up and running all at pretty much the same time, fun! (and I’m mostly new to SG as well, more fun!)

So, I’m attempting to idiot-proof everything and keep it super simple; but it’s not easy, since nobody is ever really going to be constantly patrolling Shotgun to keep everything in shape. (although I’ll be trying…)

OK, I had set up a shot with only one task, which has a reviewer assigned. However, I think the artist submitted a version from the shot versions page, which didn’t pick up the task link. So the version was submitted without the reviewer seeing it.

First, I had left the task unassigned, as I didn’t know who on the team would submit it. I think I need to tell them to assign themselves to the specific task if they pick it up, right? I suppose otherwise it’s going to be harder for them (and me) to keep track of everything they’re doing. And this is also how the reviewer slipped through the cracks.

Second question, is it possible to add a Reviewer field to the Create Version dialog? That would seem to be the best failsafe, and also a great way to flag almost anything for review. I couldn’t find a way to add it to the layout, though.

I’ll be interested to see what other responses are, but since the Reviewer field is tied to the Task, I don’t think there’s any way to get it to show up on the Create Version dialog. But what you CAN do is go to the Create Version dialog box, make sure “Task” is one of the options, then check “require for creation” and then they can’t upload without a Task involved and you solve two problems at once. It’ll force them to assign themselves tasks AND attach those tasks to the versions. 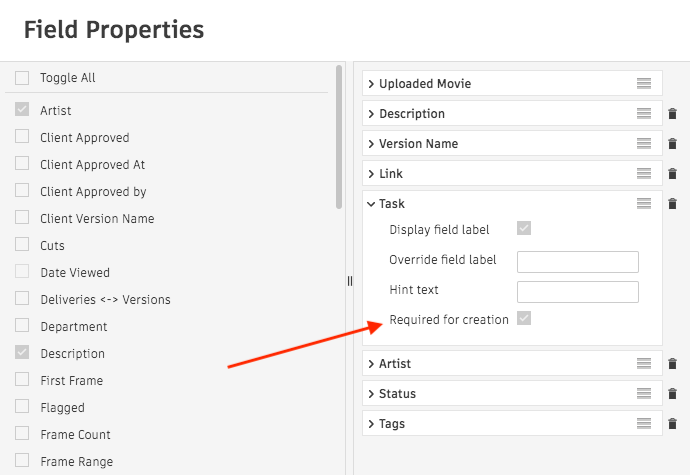 Once you have that box checked be sure to choose the Save Form as Global Layout on your way out and you should be all set.

Thanks @jlweiss … I think that’s a pretty good solution!

I think I’m going to have to force a bit of conformity on everyone in order for something like SG to work properly for all of us. It doesn’t seem to like playing it too casual.

Oh, it’s definitely a good idea to set up best practices guidelines (sounds better than conformity but use whatever term you like!

) and if you explain why, i.e., if you don’t assign/attach the task the reviewer won’t see it, most people get it and are fine. Good luck with it!

Well, it’s a school after all, maybe we should just call it “Pass/Fail” guidelines.

Ok, ok, ‘Best Practices’ is probably a gentler term to go with.

There are no n00b questions, @Chad!

There are a couple of places where we try to make it as dead simple as possible, while auto-filling out the relevant Version info (entity link, Task, etc.) so the Artist doesn’t have to. This is all predicated on the Task being assigned to the Artist.

For example when using Shotgun Create the artist simply needs to select their Task and then submit their media (in a variety of ways). Check out this short video on submitting your work in Create:

As for pitching the “why” to your students, now’s as good a time as any to explain to them that the pipelines in studios require that content be submitted in very specific ways to make sure that pipeline keeps humming along. Step outside of it, your work isn’t reviewed, deadlines are missed, and the next thing you know it a key character disappears from the approved render and that Version makes it into the movie.

Ok, maybe you don’t need to scare them that much at this stage ;-).

Thanks @brandon.foster. Right now they’re just using the web version of Shotgun, rolling out SG Create is the next step, which will definitely make things easier for them. I’m planning to advise all of the reviewers to just use Create as well, since that seems to be your way forward for end users.

The students are generally pretty good with following procedures and they know that it’ll certainly be that way in the ‘real world’.

I’m still very much figuring out the best practices that work for the school and writing internal docs, so it’s been helpful to have all of the guidance out here as we find our way along.

Roger that, Chad. If they’re working primarily through the web UI, the other place to make Version submission easier would be via My Tasks:

After selecting their assigned Task, click the action icon for the “Selected Task” widget on the right, then New Version from the menu. That’ll launch the regular Version creation form, but it will be pre-populated with the entity, and Task, so all they have left to do is include a description about their submission.

Thanks Brandon. That seems like the simplest way to keep them organised and submitting versions correctly.